Since today is Cinco de Mayo, we should take a few minutes to talk about avocado production, not that we need an excuse! Of course guacamole is delicious, but have you ever paused to really consider where and how avocados are grown? Spoiler alert: It is unlikely that you live near an avocado farm.

U.S. avocado production can be found primarily in a small section of California, but also in Florida and Hawaii. Over at the U.S. Department of Agriculture (USDA), they have an agency called the National Agricultural Statistics Service, or NASS. A person can get lost there going down one rabbit hole after another exploring agricultural data, especially if you’re an ag data nerd like we are here at Medius Ag. In any case, according to a NASS survey of 2018 production, 53,640 acres of avocados were grown in the United States. Of those avocado acres, 47,000 were in California, 5,800 were in Florida and 840 acres were in Hawaii. Total 2018 U.S. production of avocados measured 185,770 tons and was valued at just over $400 million. By comparison, nearly 40 million acres of wheat were harvested in the United States in 2018 alone. 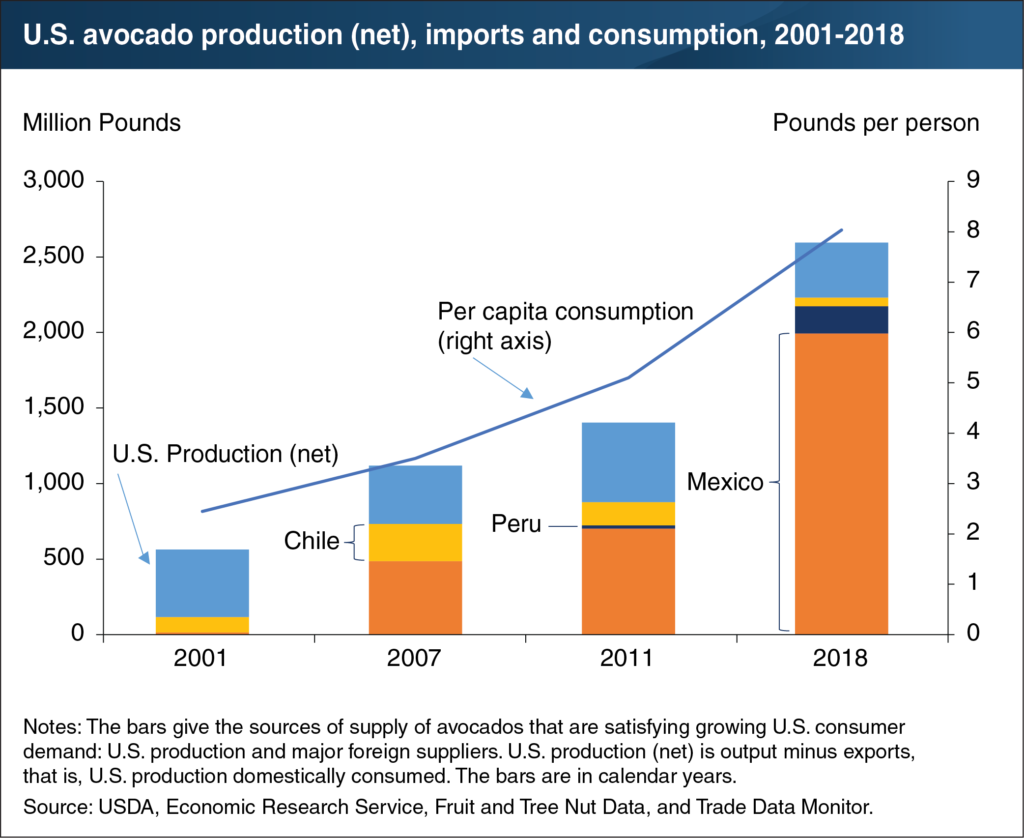 Meanwhile, another USDA agency called the Economic Research Service, or ERS, notes that U.S. per capita consumption of avocados has skyrocketed from less than two pounds in 2001 to eight pounds in 2018. That’s a lot of avocados. In fact, that’s so many avocados that as a country we couldn’t possibly hope to produce enough to meet domestic demand without a significant increase in acres or yield, or both. The answer to this demand is to import them, mostly from Mexico, Peru, and Chile. This ERS chart is a pretty good illustration of both the increase in avocado consumption and where our imports come from.

Of course boosting yields and acres is easier said than done. In fact, over the past 70 years, human efforts to improve upon the industry standard that Mother Nature has established have yet to be successful, in terms of commercialization and market share at least. In July 2017, Smithsonian Magazine published a fascinating article written by Brian Handwerk under the title “Holy Guacamole: How the Hass Avocado Conquered the World” noting that of all the avocados grown in the world, “95 percent in the U.S. and about 80 percent worldwide—are of a single variety: the ubiquitous Hass.” Handwerk rightly notes that this is an incredible statistic particularly because the Hass was developed less than 100 years ago as an accident by a California mailman — like we said, fascinating article.

It is remarkable that modern breeding practices have not yet identified an improved variety to take the place of the Hass. Tim Spann of the California Avocado Commission notes in the Smithsonian article, “Essentially, Hass is the perfect avocado for the world market as we know it today.” This observation helps to explain why the Hass variety is so extremely popular throughout the supply chain.

Despite the valuable predictability of the utilitarian Hass, there are advantages to developing new varieties. With monoculture and less genetic diversity comes the increased threat of an epidemic that could severely cripple production worldwide if a pest or disease went unchecked. This is precisely the concern of University of California-Riverside researchers Dr. Patricia Manosalva, a plant pathologist and Dr. Mary Lu Arpaia, an avocado breeder. In a January 2017 article for Wired, author Gregory Barber does a great job of juxtaposing the concerns of the avocado research community with the supply chain advantages of such a heavy reliance on a single variety. Although written only three years ago, the avocado breeding outlook was not exactly rosy and this was reflected in its title, “The Long, Lonely Quest to Breed the Ultimate Avocado.”

But there are also reasons for optimism. Not even a year ago, a multinational research team announced that they had mapped the avocado genome. One of the study leads, Dr. Victor Albert of the University of Buffalo, notes that this development lays the groundwork for improving upon industry standards because it will allow future breeding work to specifically focus upon the shortcomings of the Hass variety, including sensitivity to soil salinity, temperature changes, and susceptibility to laurel wilt. Of course, with a 17-year lag between crossing and commercialization, it could be a while before consumers see something besides Hass.

Nevertheless, like any self-respecting guacamole fan, on this Cinco de Mayo I am rooting for Dr. Arpaia and her colleagues at the Lindcove Research and Extension Center in the face of strong variety development headwinds. The future progress made in avocado breeding will be interesting to observe!